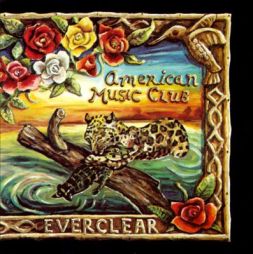 TITLE: Everclear
YEAR RELEASED: 1991
CHART ACTION: No
SINGLES: Why Won’t You Stay, Rise
OTHER SONGS YOU MAY KNOW: Sick of Food
LINEUP: Mark Eitzel, Vudi, Dan Pearson, Mike Simms, Bruce Kaplan
WHAT’S IT ALL ABOUT: Lachrymose, moody band makes a great record for those who are bummed out to commiserate.

SOME WORDS, PHRASES AND CLAUSES ABOUT THIS RECORD: Can you feel good about being depressed? Maybe. This record from American Music Club is a great record for those who want others to share in their despondency. Now, some of the tunes sound like they have a lift and a happy sound, but nah, the mood is one of being sad and lonesome.

The production is perfect, framing Eitzel’s songs just so, and the band’s performances are also very sympathetic. Maybe it’s TOO real, AMC never quite made it. It touches a lot of nerves that may be too real for us. It’s a record of a full ashtray and an empty bottle.

So, this is all to say that this is great. Most everything works. It’s a shame they didn’t get the recognition they deserved.

NOTES & MINUTIAE: Eitzel was named songwriter of the year by Rolling Stone in 1991 for this album.

IS THERE A DELUXE VERSION: No. The time has come for a complete re-release and expansion of AMC’s back catalog.

GRADE: A: Elton John said sad songs say so much – but Eitzel’s sad songs stay with you.