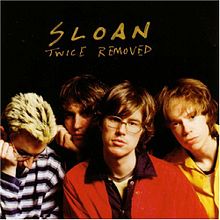 OTHER SONGS YOU MAY KNOW: Sloan fans win – but probably not us in the USA.

WHAT’S IT ALL ABOUT: Sloan ditches the grungy distortion, and record a clear power-pop record. It got them acclaim, and dropped from their record company.

SOME WORDS, PHRASES AND CLAUSES ABOUT THIS RECORD: Clear guitars, harmonies, melodies, and some crunch (but not enough to obscure the songs). It’s a perfect recipe for power-pop. Sloan’s second release delivers it.

Featuring songs from each band member (as per usual), Sloan delivered a varied record with songs ranging from down ballads like “Loosens” to pop singles ready for radio like “Coax Me” and songs like “Bells On” or “Worried Now”, which gives you some clear and then crunchy dynamics like classic Posies.

Canadians ate this up – while not a strong seller at first the album grew on folks up there. It’s pretty good record from head to toe. Yet, since it wasn’t GRUNGE or whatever Geffen dropped them when it stiffed here in the US. But they barely promoted it except on an obscure compilation. Record companies…

NOTES & MINUTAE: In 1995, this was voted the #1 album of all time by a Canadian artist. A few years later, it was down to #3, but is still acclaimed up there.

IS THERE A DELUXE VERSION:  Japanese bonus tracks, of course.

GRADE: A-: This covers the range of tempos and moods that you want from a good power-pop record.