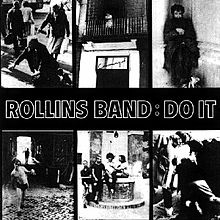 OTHER SONGS YOU MAY KNOW: The live set has  a lot of Rollins Band faves.

WHAT’S IT ALL ABOUT: The Rollins band releases a half-live, half-studio “EP”, and expanded it for CD later on.

SOME WORDS, PHRASES AND CLAUSES ABOUT THIS RECORD: The original version of the Rollins Band was a force live, and you can feel the energy ooze through the speakers on songs like “Lonely”, “Turned Out”, “Black and White” and others. The studio cuts were three covers from the Pink Fairies, the Velvet Underground and Louis Prima (!)

What drags the extended version out are the two verrry long, slow diatribes (standard for Rollins) which are taken from different shoes from the Dutch show the original tracks were from. This isn’t streaming, and the 2007 version is probably the one that’s easiest to find, so that’s what I’ll grade.

You can skip those, though, and focus on the hot heat and bile generated by Rollins and his band. Haskett, Weiss and Cain are so powerful and focused and are locked in tightly.

NOTES & MINUTIAE: One of the bonus cuts showcases Rollins’ sense of humor, though, as it’s the intro to the show from the Netherlands.

IS THERE A DELUXE VERSION: As noted.

GRADE: B+: Those two long track drag down the end of the record. But man, this really cooks besides that.