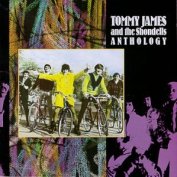 OTHER SONGS YOU MAY KNOW: If you have a Tommy James compilation, probably

WHAT’S IT ALL ABOUT: Quintessential teenage pop / rock from the 60’s.

SOME WORDS, PHRASES AND CLAUSES ABOUT THIS RECORD: It took almost two years for the first Shondells song to become a national hit (that’s a story on its own), but once James got a working band and hooked up with songwriter Ritchie Cordell, the hits just kept coming.

James rebelled a bit at being a bubblegum singer, and that’s when he veered into psychedelia with “Crimson & Clover” and made albums that weren’t just hit+filler. Still, the hits didn’t stop until James had to quit due to a medical scare in 1970.

Most every one of these songs, major or minor hit, brings a smile to your face. Bubblegum or not, it’s a good collection from a major 60’s hitmaker.

NOTES & MINUTIAE: James’ involvement with Roulette Records and its boss Morris Levin is the subject of a book James wrote. It basically was a mob front.