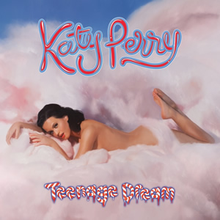 OTHER SONGS YOU MAY KNOW: If something else got on the radio, you tell me.

LINEUP: Katy Perry and I count 17 others appearing on it, including Snoop and Kanye

WHAT’S IT ALL ABOUT: Big McLarge Huge record that’s basically pop confections. Nothing filling for sure, but many songs are sweet.

SOME WORDS, PHRASES AND CLAUSES ABOUT THIS RECORD: There may be a few people on planet Earth that hasn’t heard some of these tracks. Let me summarize: eight producers collaborate with Perry on a 12-song record (the regular version) that took over radio and pop culture in 2010. The songs all sound very polished, Perry’s vocals are improved (she’s not trying to sing right INTO your ears, but she’s not subtle), and there are hooks and hooks and more hooks.

It does sound artificial, but not overtly so. Perry’s vocals are double and triple tracked and maybe auto-tuned some, but she doesn’t sound fake or like a robot and for most of the up-tempo pop songs her style works well.

There are some turkeys on here, and she’s not really a ballad singer. She’s just better with fun pop songs, and hanging out with Snoop and singing memorable hooks that sound great on the radio.

NOTES & MINUTIAE: The singles off of this album spent 225 straight weeks on the Hot 100. Holy shit, Sherlock!

GRADE: B:  This owned the early 2010’s. The singles will be what people remember from this era.