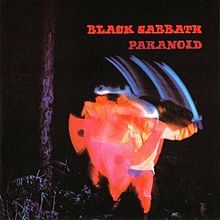 OTHER SONGS YOU MAY KNOW: Electric Funeral, Hand of Doom.

WHAT’S IT ALL ABOUT: Building from their first album, Black Sabbath releases their magnum opus, an album full of great riffs and doomy lyrics.

SOME WORDS, PHRASES AND CLAUSES ABOUT THIS RECORD: Most of this album is in the vernacular of every rock-and-roll fan. Who hasn’t air guitared to “Paranoid” or “Iron Man”? From a debut album that was plagued by mindless noodling on the second side, the lads from Birmingham release a tight album that cuts down on the showing off and gives us the goods.

The lyrics, mostly from bassist Geezer Butler, address war, desolation, isolation, drug abuse and the state of mind of the left behind. Ozzy puts everything he has into the vocals, and the band isn’t that far behind. Tony Iommi’s guitar is on point this time, while Butler’s bass carries and grounds the songs. Bill Ward’s drumming is also among his best.

The divisive song on here is “Planet Caravan”, but Sabbath always had an ear for a softer and spookier sound. Even the cut that’s an excuse for a drum solo is tight and focused.

NOTES & MINUTIAE: “Paranoid” was famously written on the spot, in the studio, to fill three minutes. Many of the other riffs were taken from jams when they had to fill a LOT of time on stage when they first performed.

IS THERE A DELUXE VERSION: Yes a set with the Quad mix and alternate takes.

GRADE: A+: I dig the weird one, and even think the one for the drum solo is decent. The rest there’s no question about.