WHAT’S IT ALL ABOUT: Hard-to-explain work featuring orchestral passages, musique concrete snippets, and voices from ‘the piano’.

SOME WORDS, PHRASES AND CLAUSES ABOUT THIS RECORD: Even in his early days, Frank Zappa had a conceptual continuity around certain pieces of his work, where they would all come together as a whole when released and reveal the total piece over time. This was the first released in 1967 but had to be pulled. Then Zappa re-edited the music and added the voices as part of his four album suite released in 1968.

As for the piece itself, themes of music flow throughout his later work, and the music itself is complicated, complex and imaginative. 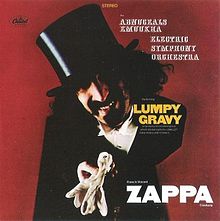 It’s hard to describe in words, and it’s also hard for casual listeners since you need to be invested in the piece to really gather it all in. It is brilliant, though.

NOTES & MINUTIAE: He released this on Capitol, and MGM sued because of the contract Zappa had with that company. The album was pulled, and then Zappa re-edited it and released it on MGM.

GRADE: A-: It’s not something I’d listen to every day, but it is a piece of art that only a few souls could pull off