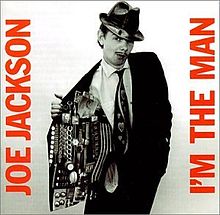 OTHER SONGS YOU MAY KNOW: On Your Radio

WHAT’S IT ALL ABOUT: Second album for Jackson is similar to his debut, but a few of the songs are a bit flatter or forced.

SOME WORDS, PHRASES AND CLAUSES ABOUT THIS RECORD: Storming out with “On Your Radio”, the first half of I’m the Man is equal or better to most everything on his debut. But on the second half, the quality slides a little bit.

This may be that Jackson ran out of writing steam. Tracks from this album were written about the same time and were in the band’s repertoire. It just seems that finally, after a side-and-a-half of excellence, he was coasting and repeating himself a bit.

The first side, though, is another quality set of tracks from Jackson. I just don’t listen to tracks 6-10 as much.

IS THERE A DELUXE VERSION: Yes, a live B-side