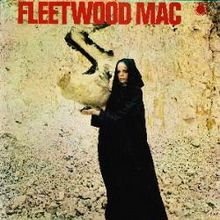 TITLE:  The Pious Bird of Good Omen (English Rose in the US)

OTHER SONGS YOU MAY KNOW: Blues freaks may know a couple

WHAT’S IT ALL ABOUT: A collection of singles and cuts not on either US or UK albums issued when they switched record companies.

SOME WORDS, PHRASES AND CLAUSES ABOUT THIS RECORD: I decided to go back and grab this compilation for a review – since it’s streaming and really fits in right before Then Play On.

As usual, Fleetwood Mac’s complicated discography comes into play. Both the US and UK models are streaming, but the UK CD reissues are somewhat expurgated versions from their vinyl. There is overlap of a few songs on both versions, and some of the US version was on the previous UK studio record Mr. Wonderful. AND…the US album has some refugees from the original UK version of Then Play On.

Anyway, this is bluesy Fleetwood Mac, and most of it is good, bluesy Mac. Peter Green’s the star, but the two songs by Kirwan are decent as well. For me, the less Jeremy Spencer, the better. If you’re into the blues version of the band, give this a few spins.

NOTES & MINUTIAE: Yes, the original “Black Magic Woman” is on these comps. As is the out-of-nowhere hit instrumental “Albatross”

IS THERE A DELUXE VERSION: The original UK vinyl had some songs that they did along with bluesman Eddie Boyd that actually live on a Boyd album

GRADE: B-:  It’s good, but it’s really hard to keep up with these permutations. English Rose is probably the better deal, but just pick what you like.