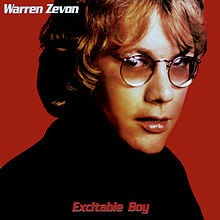 OTHER SONGS YOU MAY KNOW: Johnny Strikes Up the Band, Roland the Headless Thompson Gunner, Accidentally Like a Martyr.

WHAT’S IT ALL ABOUT:  A fantastic album buoyed by a classic song, which was an unlikely hit.

SOME WORDS, PHRASES AND CLAUSES ABOUT THIS RECORD: Most every song on this record is a Zevon classic, which means well-written, impeccably arranged and played, sardonic, sarcastic, political, and darkly humorous.

Zevon can make you singalong to African mercenaries, trust funders in over their head, and werewolves. In fact, the only song that’s questionable is the title track, which seemed a bit forced and tossed off for a song about a teenage killer. Maybe that was the point, though.

Everyone who was someone in the LA session world was part of this album, with Jackson Browne and Waddy Wachtel producing. It sounds nearly perfect, and also a lot of fun to make, which is a hard thing to do. Zevon’s songs will do that to you. I can see musicians loving to play them.

NOTES & MINUTIAE: Yeah, with the LA scene came the cocaine. Wachtel said that it only took him one take to get the solo for “Werewolves of London” down, and he didn’t have a chance to take a hit of the coke before hand. I’m sure he got a bump or two after, though.

IS THERE A DELUXE VERSION: A few outtakes.

GRADE: A: And now you have the piano riff from “Werewolves of London” in yer head.