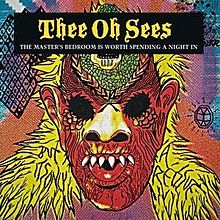 TITLE:  The Master’s Bedroom Is Worth Spending a Night In

OTHER SONGS YOU MAY KNOW:  None

WHAT’S IT ALL ABOUT: Lo-fi garage band doesn’t skimp on the melodies, or the fun, and this makes a listenable record despite the clatter.

SOME WORDS, PHRASES AND CLAUSES ABOUT THIS RECORD: Thee Oh Sees is the third band leader John Dwyer put together in succession. After concentrating on tonal experiments, neo-folk and other recording techniques as side projects, Dwyer morphed the group into a garage-punk type band after drummer Mike Shoun joined.

It’s not something you’d use to test stereo equipment, but it’s got a lot of fun elements. The melodies are there, with plenty of hooks that grab you. The sonic experiments are interesting homages to the psychedelic era, and there’s just a sense of serious fun with appropriate sounding keyboards and guitar.

A few tracks still are laden with the lo-fi recording-experiment BS, but those are easily done away with, and you can just enjoy the garage rock.

NOTES & MINUTIAE: Dwyer was in two other bands that split apart in 2005 and 2006, thus elevating this from side project to full-time band.