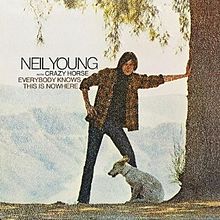 TITLE:  Everybody Knows This Is Nowhere

SINGLES: Everybody Knows This Is Nowhere, Down by the River, Cinnamon Girl (#55)

OTHER SONGS YOU MAY KNOW: Cowgirl in the Sand

WHAT’S IT ALL ABOUT:  First release for Young with Crazy Horse (formerly the Rockets) has three all-time classic songs, but a couple inconsistent cuts.

SOME WORDS, PHRASES AND CLAUSES ABOUT THIS RECORD: Starting out with “Cinnamon Girl” and its classic one-note guitar solo (and one of the best riffs in rock), and ending with Cowgirl in the Sand, this record established Young as a force in rock-and-roll, and really illustrated his strength as a composer as well.

Crazy Horse proved to be the perfect foil for Young when in this rock mode. Danny Whitten harmonized well with Young and was a great guitar supplement to him as well. The songs that work blasted out, and even when they jammed on for a while they still had urgency and tension.

However, a couple of the tracks really don’t work that well – mostly when Young gets quiet and soft-ish. He still needed to work on his ballad sound. Yet the classics and great tracks work well.

NOTES & MINUTIAE: Young hooked up with the Rockets in 1968 after Buffalo Springfield exploded. He took Whitten, Talbot and Molina and called them Crazy Horse.

GRADE: A-: My goodness, the three huge songs are huge. But the two blah cuts really stop the momentum.