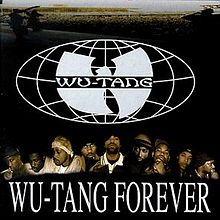 OTHER SONGS YOU MAY KNOW: Impossible

WHAT’S IT ALL ABOUT:  Hard, heavy-duty follow-up album lives up to the hype and is a rare double-CD that has hardly any filler.

SOME WORDS, PHRASES AND CLAUSES ABOUT THIS RECORD: It was going to be hard to top the debut Wu-Tang Clan, and doubly hard to make a hip-hop double CD that was worth the money and trouble.

Most everything here works, and the rhymes and beats come together in a seamless fashion. The samples and music are well thought out and definitely complement the lyrics, which are quite hardcore descriptions of life in the streets and the characters that inhabit it.

Only the second disk has filler – the first and last cuts are monologues that can be dispensed with. There’s nothing else that doesn’t work, and it’s well sequenced too. This…this is a classic.

NOTES & MINUTIAE: RZA allowed some others to produce a few tracks.

IS THERE A DELUXE VERSION: There are a couple of extra songs on the international version.

GRADE: A: A fantastic hip-hop record, among the best ever.