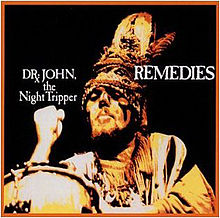 WHAT’S IT ALL ABOUT: Dr. John gets back to business, and releases an album with a spooky vibe that contains a whole side for a scary song about a famous Louisiana prison.

SOME WORDS, PHRASES AND CLAUSES ABOUT THIS RECORD: Dr. John shook off the relative failure of his last album, and came up with a first side of material that fits in with his stoner New Orleans voodoo vibe that’s fun and carefree, like “Mardi Gras Day”. His vocals seem like he’s imbibed and in a good spirit to get into that voodoo vibe.

Then there’s the second side.

Angola is an infamous penitentiary in Louisiana, and at this time was infamous for brutality, assaults, sexual slavery, and egregious use of solitary confinement. “Angola Anthem” was sold to Dr. John from a former inmate of Angola, and is a side-long glimpse into the harrowing life there. The backing is menacing, and the sounds of chains and other metal is absolutely chilling. John’s voice, which on the first side was joyful and stoned, is now fearful.

Not many people know of that track, which is a shame, since it’s definitely a protest anthem toward the harsh treatment of inmates there – and by all accounts it’s not gotten much better.

NOTES & MINUTIAE: Cold Grits was a band that’s kind of confusing and I couldn’t get a line on who actually is or was in it.

GRADE: A-: Be prepared for a bad trip on the second side, but it’s art that needed to be released.