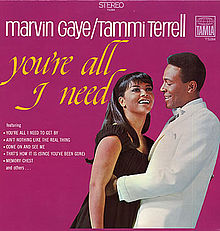 TITLE:  You’re All I Need

WHAT’S IT ALL ABOUT: Second duet album from the great Motown pairing is solid as its singles (unusual for Motown in the 60’s).

SOME WORDS, PHRASES AND CLAUSES ABOUT THIS RECORD: Marvin Gaye & Tammi Terrell’s albums were a step above the usual Motown records. Most of their strongest material was written for them by the team of Ashford & Simpson, and played to their strengths.

Great arrangements, production (from either Ashford & Simpson or Harvey Fuqua & Johnny Bristol), and backing add to the duo’s voices.With some big-time timeless hits, and a good balance of other tracks, this is one of the better Motown albums in the 60’s.

Sadly, this was the last album made with the two as a functioning duet. Terrell’s brain tumor, which caused a fall in 1967, would worsen and made touring impossible and recording difficult.

GRADE: A-: This is a great Motown album, full of good tracks and nothing recycled.