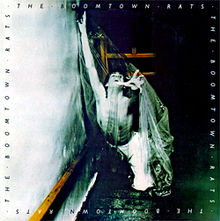 OTHER SONGS YOU MAY KNOW: Joey’s on the Street Again

WHAT’S IT ALL ABOUT: Debut record by the Irish band has a punk attitude with a some melody shining through. It’s a bit inconsistent, like most debut punk records.

SOME WORDS, PHRASES AND CLAUSES ABOUT THIS RECORD: Emigrating from Ireland to London, the Boomtown Rats’ blend of punk with some R&B and Irish influences proved to be popular. The energy of the band carried through even though some of the songs seemed to be rushed or redundant and didn’t quite fit at times.
Bob Geldof’s vocals and energy was the focal point of the band, and his lyrical observations were starting to break out of some of the punk rock limitations. The band, though, was still rather much in the punk rock style and sound for most of the album, except a couple of times where they slowed down enough for Johnny Fingers’ piano to shine through.

The songs are rather inconsistent, except for the singles, and “Joey’s on the Street Again”, which showed Geldof listened to Springsteen. But it was a decent start and there was going to be more good things happening to the band.

NOTES & MINUTIAE: The original name of the band was The Nightlife Thugs.

IS THERE A DELUXE VERSION: Yes, live demos.

GRADE: B: Decent debut, they were already outgrowing punk but still seemed limited by the genre.