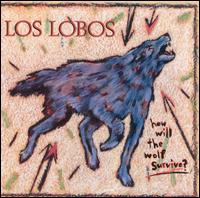 TITLE:  How Will the Wolf Survive

OTHER SONGS YOU MAY KNOW: I Got Loaded

WHAT’S IT ALL ABOUT: Debut long-player showcases the versatility and chops of the East LA band.

SOME WORDS, PHRASES AND CLAUSES ABOUT THIS RECORD: A first-time listener to this entire album, thinking of just the radio cuts, would definitely be surprised by the breadth and depth of this album.

They know how to play rock, sure, and they can sling guitars. They also can play plaintive ballads. But they’re adept at a more blues based style, and most importantly, native Norteno that to the untrained ear sound like polkas. The accordion is just as important of an instrument to them as guitar.

Vocally, David Hidalgo and Cesar Rosas are adept at all of the material, and their guitar playing and Higalgo’s mandolin are excellent. It’s a revelatory record and opened a lot of ears toward Mexican music.

NOTES & MINUTIAE: Drummer Louie Perez co-wrote seven of these tracks, collaborating with both Hidalgo and Rosas.

GRADE: A:  Fantastic album that should open one’s ears at the versatility of the band.