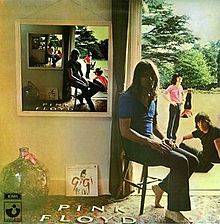 OTHER SONGS YOU MAY KNOW: Live version of four early Pink Floyd classics

WHAT’S IT ALL ABOUT: A fantastic live set, and then….

SOME WORDS, PHRASES AND CLAUSES ABOUT THIS RECORD: First, the live part of the double album. Even if it’s missing “Interstellar Overdrive” (recorded but not used), the four songs they chose (“Astronomy Domine”, “Careful with That Axe Eugene”, “Set the Controls for the Heart of the Sun” and “A Saucerful of Secrets”) demonstrate early Floyd at their peak, showcasing their musicianship and demonstrating that they weren’t just a product of the studio.

Then there are the studio sides. Each member got one half of one side, and self-indulgent doesn’t cover it. There are a couple of real songs in parts and they’re BORING AS HELL. The others are just meandering, and in retrospect the band didn’t seem into it, either.

Stick to the live stuff, and forget about the rest.

NOTES & MINUTIAE: Basically, everyone in the band has issues with the studio sides when all was said and done.

GRADE: C+:  The live side gets an A (A+ even), but gawd…my brain hurst from the studio goop.