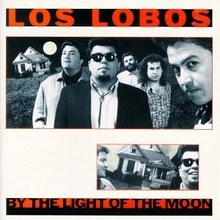 TITLE:  By the Light of the Moon

OTHER SONGS YOU MAY KNOW: One Time One Night

WHAT’S IT ALL ABOUT: A let down after their brilliant 1984 album, but there are some decent tracks here.

SOME WORDS, PHRASES AND CLAUSES ABOUT THIS RECORD: It took a while for Los Lobos to release their second album. “One Time One Night” was under the opening credits for Colors, but the rest of the album didn’t come out until 1987.

They struggled with material, seemingly. It was an attempt to try to replicate the success, but the songs weren’t as vital or fresh as their previous set.

A couple tracks (“Set Me Free (Rosa Lee”) and “One Time One Night” are stellar, and it’s not like the other tracks are bad. But it is kind of disappointing compared to their first full-length.