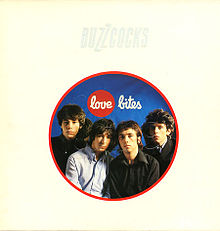 SINGLES: Ever Fallen in Love (With Someone You Shouldn’t’ve) (#12 UK)

OTHER SONGS YOU MAY KNOW: Operator’s Manual

WHAT’S IT ALL ABOUT: Second full album by the pop-punk band is a bit ragged. With their best songs saved for singles the deep cuts seem lackluster.

SOME WORDS, PHRASES AND CLAUSES ABOUT THIS RECORD: Working fast was the ethos in the punk and post-punk era, and with the singles released around this time shows that Pete Shelley had the songwriting chops.

Yet it seemed that as the record moves on to side two, it runs out of steam. The fantastic single “Ever Fallen in Love” is definitely worth the price of admission, but as we move to side two it definitely feels that the Buzzcocks needed to fill up the numbers instead of making great art.

A lot of this is still quality stuff, and the packed deluxe edition is fantastic. But the original album isn’t as shiny as their first releases.

GRADE: B:  I just didn’t feel this as much as their debut album.