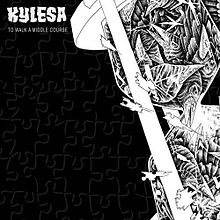 TITLE: To Walk a Middle Course

OTHER SONGS YOU MAY KNOW: Only the metalheads know, unfortunately.

WHAT’S IT ALL ABOUT: Second album from sludge-alt-new-whatever metal combo melts some damn faces off.

SOME WORDS, PHRASES AND CLAUSES ABOUT THIS RECORD: Sure, they shout instead of singing (for the most part), which could lessen its appeal to the wimpier, but dang it, this cooks.

Adding Laura Pleasants’ voice into the yowl by Phillip Cope (or Corey Barhorst) helps break up the monotony and adds tension. The star here though are the riffs, and the feel. Cope and Pleasants rip through riffs, and the production adding quieter parts and samples also bring balance.

Yeah, it’s still a bit monotonous – all of those killer riffs can run together – but in small-to-medium doses, your face will melt.

NOTES & MINUTIAE: Between their debut and this, they released a few very limited edition 7” singles.

GRADE: B+:  I can’t quite get there with an A-, because of some of the monotony, but for metal heads wanting something powerful and non-generic, this is a good one.