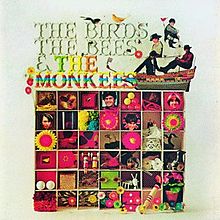 TITLE: The Birds, The Bees & The Monkees

OTHER SONGS YOU MAY KNOW: Not really.

LINEUP: Davy Jones, Mickey Dolenz, Michael Nesmith. Peter Tork was barely on the album. Each Monkee used their own session men and produced their own tracks.

WHAT’S IT ALL ABOUT: Here’s where the Monkees start to lose their appeal. It’s a good album, but a letdown from their 1967 work.

SOME WORDS, PHRASES AND CLAUSES ABOUT THIS RECORD: After a great 1967 musically, the year 1968 started with a couple of hit singles, but then the news that NBC was cancelling the TV show. At this time, the band was around studios in Los Angeles recording the sessions for this album separately, with only a scant few crossovers with other members.

The result is an album that plays it safe AND is experimental, but it’s track for track. Davy Jones sticks to his formula, while Mickey Dolenz stays somewhat in the traditional pop / rock milieu with some psychedelic experimentation, and Mike Nesmith just goes, well, all out weird. (Peter Tork submitted a couple of tracks, but they weren’t chosen at the time for who knows why…)

It’s an album that you need to pick and choose based on your mood. More so than ever, it shows that the Monkees had musical talent, but they weren’t really a band in a true sense of the word.

NOTES & MINUTIAE: After this album and the news of the cancellation, the Monkees set about to record and film Head, which, is quite the project.

IS THERE A DELUXE VERSION: It seems that every note the Monkees committed to tape has been reissued, and this is true here – multiple editions exist with several bonus tracks and takes and demos.

GRADE: B:  There are some strong songs here, but it’s just all over the place. The cohesion isn’t there.