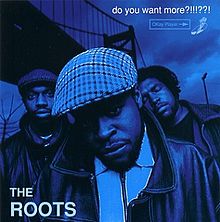 OTHER SONGS YOU MAY KNOW: Probably not unless you’re a fan.

WHAT’S IT ALL ABOUT: The Roots really begin here – using jazz, rock, R&B, and other music and sounds to create innovative and provocative hip-hop.

SOME WORDS, PHRASES AND CLAUSES ABOUT THIS RECORD: It seems the Roots have always been with us, melding hip-hop with all kinds of sounds, writing provocative rhymes, and keeping the genre fresh and innovative. But they didn’t emerge from the underground until 1995.

Even though some of the raps are angry sounding, they definitely were going against the ‘gangster’ genre into more of a politically focused style. Produced by the Roots and the Grand Negaz, this is definitely an antidote to what hip-hop was going to become, with an emphasis on real music and not samples. Definitely ahead of its time.

NOTES & MINUTIAE: Personnel would change as always, but keyboardist Kamal Gray joined and hasn’t left yet. He’s the longest tenured behind Questlove and Black Thought.

GRADE: A-: A bold statement from a bold, innovative band.