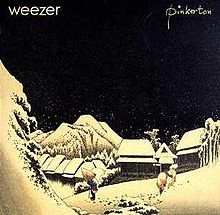 OTHER SONGS YOU MAY KNOW: Tired of Sex, Getchoo

WHAT’S IT ALL ABOUT: At the time, a commercial disappointment. Now, a cult album hailed as a masterpiece. The truth is in the middle.

There are way too many tales, tomes, and essays about Pinkerton. It was an album created after an ambitious project was scrapped (and several songs morphed and mutated into the versions here). It was harder edged, with a great crunchy guitar sound, and a driving distorted bass. Patrick Wilson, Brian Bell, and Matt Sharp do yeomen’s work backing Rivers Cuomo. The melodies were there as well.

A lot of the focus were on the confessional lyrics. I think that’s malarkey, really. Critics wanted to pick them apart – radio didn’t hear another “Buddy Holly” – and casual fans didn’t hear what they wanted. That was their loss. Yet, it’s not the Holy Grail of albums either. It’s a solid record much better than a lot of late 90’s albums and it’s a shame that the initial reaction to this altered the band so much.

IS THERE A DELUXE VERSION: Yes, b-sides and live tracks, of course.

GRADE: A-: Solid album, just got caught up in a media maelstrom and other industry BS.