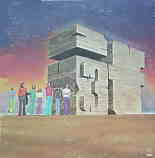 OTHER SONGS YOU MAY KNOW: Nnnnooooopppppeeeee

WHAT’S IT ALL ABOUT: Third album by jazz-rock combo sounds like a repeat of their first two albums, and it seems flat and same-old when compared to the others.

SOME WORDS, PHRASES AND CLAUSES ABOUT THIS RECORD: There’s some nice playing here and some decent arrangements, but this third record from If is about as imaginative as the title. The vocals and lyrics don’t always seem to the fit right, and even though guitarist Terry Smith does good work (especially on “Here Comes Mr. Time”), it all sounds pretty similar to what’s come before.

There’s more vocals here than on past albums, but moving to a more concise structure doesn’t do much for the album or the group. I’ve moved their catalog into my jazz folders for the most part.

IS THERE A DELUXE VERSION: Yes, with the single mixes.

GRADE: C+: Three records in two years may have spent the ideas for the band. Exiled their catalog to jazz.