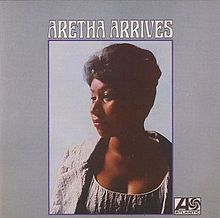 OTHER SONGS YOU MAY KNOW: Most all of the album are covers of known songs.

WHAT’S IT ALL ABOUT: A rushed second Atlantic album fails to capitalize on Aretha’s excellent first Atlantic soul album.

SOME WORDS, PHRASES AND CLAUSES ABOUT THIS RECORD: Not even allowing her to recover from an injured elbow, Atlantic put Franklin back in the studio to record a followup to her landmark soul record. The magic that was there earlier just wasn’t there.

Aretha’s in good voice, of course, but the material at times seems unsuited, or uninspired. It moved copies, but it’s not memorable. It’s just…there.

She’d rebound, of course, and become the consistent performer that we know today. Still, it Atlantic made a mistake in rushing this.

NOTES & MINUTIAE: Because of her injury she couldn’t play the piano except for the slower numbers.

GRADE: C: It’s not streaming by itself, but it’s really not worth the effort.