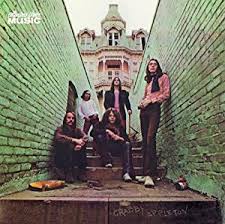 OTHER SONGS YOU MAY KNOW: Uh-uh

WHAT’S IT ALL ABOUT: Grabbing a singer from the Millennium, the band Stonehenge becomes Crabby Appleton and record a great debut that saddles them one-hit wonder status.

SOME WORDS, PHRASES AND CLAUSES ABOUT THIS RECORD: Crabby Appleton’s debut’s single, “Go Back”, is a great piece of 70’s rock with enough pop that it should have been cranking out of radios all over the country in 1970, but stalled at #36 somehow.

The album met the same, mystifying fate. Great reviews only gave it mediocre sales, and to this day, when listening to the record, one wonders why.

Sure “Go Back” is their poppiest tune, but the rest of the record is good-to-great rock for the era, with varied styles and textures that don’t rely on a formula nor “hit plus filler”.

Who knows, man. Maybe it was the name, but it was recognizable since Crabby Appleton was a villan on a cartoon shown during Captain Kangaroo. Ah, well. Listen to it now; it’s good.

GRADE: A-: You really could do worse, especially in 1970 one-hit wonders.