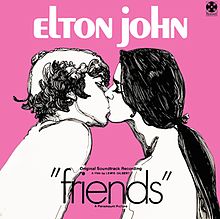 OTHER SONGS YOU MAY KNOW: No, this one’s buried for good reason.

WHAT’S IT ALL ABOUT: A slight film soundtrack to a slight teen-romance that’s all but forgotten.

SOME WORDS, PHRASES AND CLAUSES ABOUT THIS RECORD: Elton John’s creative burst (or the release of songs he had cooking up when he got signed) hit a speed bump with this album, a goopy soundtrack for a forgotten teen sex drama.

Like soundtracks, there’s some instrumental tracks (or mostly instrumental – variations of themse and all that), and then there’s a lot of sentimental fluff here.

I exiled all but three – “Can I Put You On” is the track that’s most like other John tracks from the time.

GRADE: C-: It’s probably best to just skip this one.