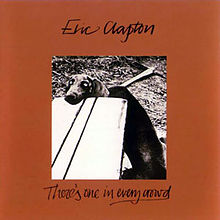 TITLE: There’s One in Every Crowd

OTHER SONGS YOU MAY KNOW: A cover of The Sky Is Crying

WHAT’S IT ALL ABOUT: How bland can you get? None, none more bland.

SOME WORDS, PHRASES AND CLAUSES ABOUT THIS RECORD: This whole damn album smacks of calculation, not spontaneity. Since there was a reggae song that was a hit on their last album, let’s put THREE on this one, and record it in Jamaica to boot – never mind the drug and alcohol problem that almost everyone had.

Clapton’s love for the JJ Cale “Tulsa” sound has made this album so laid back, it needs a jolt of caffeine to rouse it from its torpor just to be mellow.

Only the deep cut “High” roused ME from my slumber. The playing is good, yeah, and there’s some attempts at energy, but you know, this album was rushed, and didn’t need to happen. But it did.

NOTES & MINUTIAE: The original title as supposed to be “EC is God…There’s One in Every Crowd”. The record company said nix on that.