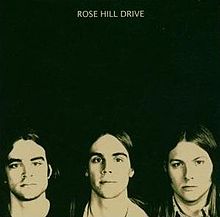 SINGLES: None, but three of the songs were on an EP

OTHER SONGS YOU MAY KNOW: Maybe not, at least not here.

SOME WORDS, PHRASES AND CLAUSES ABOUT THIS RECORD: To some bands, retro is just adding an old keyboard sound or the gated reverb drums. To Rose Hill Drive, their whole first album is retro, harkening back to the heady days of the Grand Funk Railroad power trio, but with a crisper, fresher sound.

Their sound was recognizable to classic rock lovers, though not many stations played them, of course. Though most of these songs could fit seamlessly on that format. Daniel Sproul’s guitar has a definite 70’s tone to it, while brother Jacob’s vocals carry the melody through, allowing Daniel’s guitars to set the color and riffs.

They sometimes fall into the same traps as the older power trios, with a bit too much jamming on a few tracks, a song about a guru, and an acoustic group of songs in the middle of the record which can provide relief but aren’t as well thought out as the more rocking numbers.

NOTES & MINUTIAE: Rose Hill Drive was the street the brothers grew up on in Boulder.

GRADE: B+: You don’t find many power trios running around now, but they do a good job with the group format.