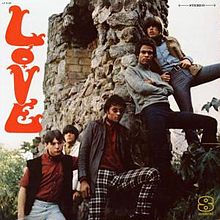 OTHER SONGS YOU MAY KNOW: Not really, no.

WHAT’S IT ALL ABOUT: Sunset Strip stars’ first album creates some buzz, but doesn’t resonate with the general public despite its quality.

SOME WORDS, PHRASES AND CLAUSES ABOUT THIS RECORD: Maybe it was the fact that they were too LA, didn’t like to tour, too oblique at times, too complicated at times, or even the fact they were a mixed-race band, but for whatever reason Arthur Lee and Love never clicked in the general marketplace.

Psychedelic sounds were slowly becoming mainstream, but Love’s combination of psychedelia, sunshine pop, and garage sound was an elevation of style over what was the mainstream. The Sunset Strip crowd loved them, and bands covered them, but those cats didn’t drive sales.

Still, it’s a fascinating album of a band straddling several musical camps. Lee and Bryan MacLean’s songs are strong, and the eclecticism is a positive.

NOTES & MINUTIAE: John Fleckenstein and Don Conka left the band (Conka was sadly let go due to drugs, and Lee’s “Signed DC” is a tribute to his friend) before recording this, and two songs may have them on it.

IS THERE A DELUXE VERSION: Yes. A B-side and mono mixes.

GRADE: A-: A great debut of the time that could have been a big hit in different circumstances.