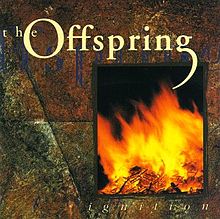 SINGLES: Bad Habit, Kick Him When He’s Down (#22 Alternative on re-release)

OTHER SONGS YOU MAY KNOW: Maybe you do, maybe you don’t

WHAT’S IT ALL ABOUT: Their first Epitaph release is a perfectly fine early 90’s punk record.

SOME WORDS, PHRASES AND CLAUSES ABOUT THIS RECORD: The Offspring were semi-known in the Southern California punk scene when they got the attention of Epitaph Records, and the label released this, their second album, in 1992. It got some traction in Southern California, and that seemed to be all fine and dandy, until, well, the hit happened on their next one.

It’s not really that far off of any of their subsequent releases, though it doesn’t really follow trends or try to be funny in search of a follow-up hit. Songs like “Kick Him When He’s Down”, “We Are One”, and “LAPD” are all familiar punk rants for various flavors.

Had the Offspring not become famous, this would have been a decent enough record to hang a career on. It certainly has credibility and honesty.

NOTES & MINUTIAE: Dexter Holland had received his MS degree by this time and was going to start on his PhD around the time of this album.

GRADE: B:  It’s nothing special, but it’s a good punk record.