OTHER SONGS YOU MAY KNOW: Dark Star, St. Stephen, Turn on Your Love Light

WHAT’S IT ALL ABOUT: The whole world now gets to experience a Dead concert, at least the musical element.

SOME WORDS, PHRASES AND CLAUSES ABOUT THIS RECORD: There are some that say this is the pinnacle of the Grateful Dead. This series of concerts in early 1969 were the culmination of the songs, sounds, and attitude of their first three albums, where they explored folk, blues, jazz, and rock in a psychedelic stew with long, long, long jams.

The first track, “Dark Star”, is the test of where you are as a listener of the Dead. You’re either right there with them through every note and improvisation, or you’d wish they’d stop noodling around and just get on with it. Yet even the most ardent critics have to admire side two’s medley of “St. Stephen” with “The Eleven”, an improvisation in 11/8, which is not an easy time signature to play in, especially on substances.

For me, their meandering stuff is just that, meandering, though I can definitely hear their musicianship and joy in explorations. Stuff like “Feedback”, though, and the almost interminable beginning to “Dark Star” tests my patience a bit. 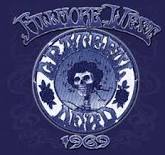 IS THERE A DELUXE VERSION: They have a 3-CD set of these dates at the Fillmore (Fillmore West 1969) which is probably a better bet since it’s got everything in some context and has more of their bluesy stuff and more ‘succinct’ songs.