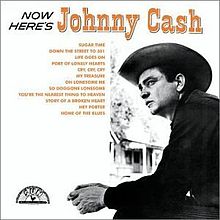 OTHER SONGS YOU MAY KNOW: Hey Porter

WHAT’S IT ALL ABOUT: Sun Records mines its vaults again.

SOME WORDS, PHRASES AND CLAUSES ABOUT THIS RECORD: Thanks to some foresight by Sam Phillips and the prolific nature of Johnny Cash, Sun Records was still able to release records by Cash well after he left the label.

This collection featured 12 songs, nine of which were not on an album before, and two of them were hits for Cash very early in his career but had never been on a regular Sun album.

This odds-and-ends collection is better than most of these later Sun Records. There’s still three repeats, but the other nine cuts are pretty decent representation of early Cash.

IS THERE A DELUXE VERSION: There are some bonus tracks released later – Phillips hadn’t quite mined all of the tracks from his collection – though one is a very rough mix.