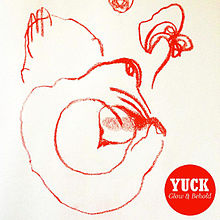 OTHER SONGS YOU MAY KNOW: Not any

WHAT’S IT ALL ABOUT: Second record from the shoe-gaze revivalist disappoints thanks to a lineup change.

SOME WORDS, PHRASES AND CLAUSES ABOUT THIS RECORD: Second albums are tough. Second albums after one of the leaders of the band bugs out are tougher. Yuck lost leader Daniel Blumberg right before they prepped the songs for this album, and while Max Bloom and Mariko Doi do adequate jobs on vocals, the songs….well…

There’s not anything horrible about them, but instead of adding something new and fresh to the shoegaze sounds they grew up on, it seems they’re content just to mimic them. They weren’t as edgy, either, so they really did sound like more of a tribute than an energetic successor.

Some tracks, like “Lose My Breath” shine like the old days, but as the record moves on, it become blander and duller, taking the album down with it.

NOTES & MINUTIAE: Daniel Blumberg went to record his own solo material, which finally saw the light of day this year.

GRADE: C: The first half is decent. The second half puts me to sleep behind a wall of just-so distorted guitars. We don’t need that, really.