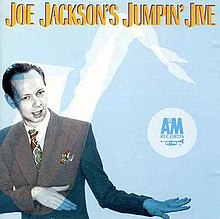 OTHER SONGS YOU MAY KNOW: All of these are swing-era hit songs

WHAT’S IT ALL ABOUT: After he broke up his angry-young-man band, Jackson goes swing (!?!) It was probably a fun record to make.

SOME WORDS, PHRASES AND CLAUSES ABOUT THIS RECORD: The swing music era always has affectionados, and revivals every now and then pop up in space and time. Joe Jackson loved the jump blues and swing, so why not put out an album of covers of his favorite songs.

Featuring songs made famous by Louis Jordan, Glenn Miller, Cab Calloway, Louis Armstrong, Lester Young, and others, Jackson leads a competent swing band through the paces in what sounds like a fun time.

Yet after a couple of plays, what you want to do is find the originals (which is now much, much easier in the streaming world) than listen to Jackson’s versions. (His voice isn’t always built for these songs). So a fun concept, the tour was probably a hoot, but these aren’t the originals and that’s what you really want.

NOTES & MINUTIAE: After this tour, Jackson changed directions again, keeping Graham Maby as the only continuum between his first band and 1982.

GRADE: C+: It’s fun, but it doesn’t have staying power since the originals are the ones you need to seek out.