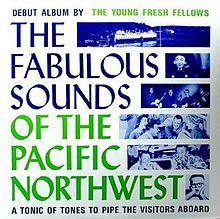 TITLE: The Fabulous Sounds of the Pacific Northwest

OTHER SONGS YOU MAY KNOW: None, again

WHAT’S IT ALL ABOUT: Debut record for winkingly ironic band.

SOME WORDS, PHRASES AND CLAUSES ABOUT THIS RECORD: The Young Fresh Fellows made a career in the 80’s from making punk and power pop inspired rock with goofy lyrics and observations for college kids during that era. This record was a blueprint for their style.

Song titles like “Rock ‘n’ Roll Pest Control”, “Power Mowers Theme”, and “Teenage Dogs in Trouble” rather much tell you what you need to know about the songs subjects. Musically, Scott McCaughey shows his versatility with playing guitar, bass, and being the conceptual mastermind.

Some of the songs’ jokes are pretty obvious, unlike in later records where it’s a little more subtle. It’s a decent debut for a decent 80’s ha-ha band.

GRADE B-: I chuckled.