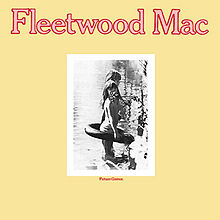 OTHER SONGS YOU MAY KNOW: Oh, no. Nothing from this record.

WHAT’S IT ALL ABOUT: Another album, another lineup, though this one would last two whole years!

SOME WORDS, PHRASES AND CLAUSES ABOUT THIS RECORD: Jeremy Spencer’s gone. Peter Green’s long gone. But John McVie’s new wife, Christine (nee Perfect) is now a full-time band member. Bob Welch, a California guitarist relocated to Paris, joined up after an ‘audition’ where he didn’t play a note. That was a good decision by the band.

This moves way away from the blues, into more of a mellow rock dominated by Danny Kirwan and Welch, with Christine McVie contributing two quintessential Christine McVie tracks. It’s mellow sound that would become the hallmark of Mac between the blues and the Buckingham / Nicks era.

Songs like the title track and “Morning Rain” are pleasant enough, and it struck the US market enough to hit the Top 100. The UK avoided this version of the group like the plague, as none of the five albums with Welch ever charted there.

NOTES & MINUTIAE: This originally had seven songs, with three long-ish ones on side one. The record company said they wouldn’t release a seven song album (at least not from them), so they added a 2 ½ minute jam quickly and called it good.

GRADE B-: It’s got its moments, and Welch is underrated as a FM member (so is Kirwan). But it’s mellowness can only carry it so far.