OTHER SONGS YOU MAY KNOW: Tangerine, That’s the Way

WHAT’S IT ALL ABOUT: One of the least well-known records is amongst its strongest.

SOME WORDS, PHRASES AND CLAUSES ABOUT THIS RECORD: Thinking of what “Classic Rock” radio plays of Led Zeppelin III, and I come up with “The Immigrant Song”. That’s it – that’s the list. It’s their loss, really. 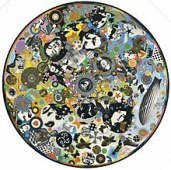 This album is rather bifurcated – with Side 1 being heavy duty (“Celebration Day”, “Out on the Tiles”) and Side 2 being of acoustic flavor (not necessarily quiet thanks to “Gallows Pole”). You hear Jimmy Page on banjo and John Paul Jones on mandolin and they’re quite skilled.

The heavy songs crunch, but have more tricks than the band’s earlier heavy tracks. The acoustic songs are a revelation. Sure, Jimmy Page dazzled with a couple of acoustic solos before, but the whole band shows their versatility – even John Bonham dials back the drums somewhat. Somewhat.

Only the experimental last track falls short, a tribute to eccentric’s eccentric Roy Harper. That downgrades the record a tad – until then it as pert near perfect.

NOTES & MINUTIAE: The joining of the tracks between “Friends” and “Celebration Day” was due to an engineer accidentally erasing the beginning of the latter. Ooopsy.

IS THERE A DELUXE VERSION: Yes – a second disc with different mixes and a couple of outtakes. One (“Jennings Farm Blues”) became “Bron-Yr-Aur Stomp” when done acoustically.

GRADE A: Underrated by the masses, but it’s one of their best overall.