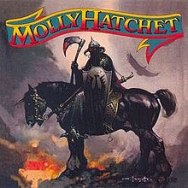 OTHER SONGS YOU MAY KNOW: Bounty Hunter, Gator Country

WHAT’S IT ALL ABOUT: Debut album takes the torch from Lynyrd Skynyrd and the Allman Brothers, though not as successfully.

SOME WORDS, PHRASES AND CLAUSES ABOUT THIS RECORD: Florida’s Molly Hatchet was the next group up for Southern Rock fans, after the demise of Lynyrd Skynyrd and the meander to irrelevance of the Allman Brothers. This debut, in fact, covers “Dreams” by the Allman brothers, albeit with a new title and a different arrangement.

The three guitar lineup for Molly Hatchet was tight, without a lot of overplaying and or showing off. Some tracks really work (“Gator Country” and “Dreams I’ll Never See”) and some just seem perfunctory. The main difference for the band is the distinctive voice of Danny Joe Brown. That voice was a signature element of Molly Hatchet during their hitmaking years.

NOTES & MINUTIAE: The cover paining is by Frank Frazetta, titled “The Death Dealer”

GRADE B: Not their best, far from their worst.