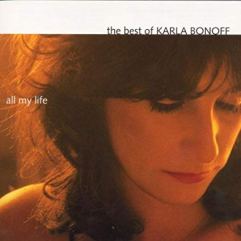 TITLE: The Best of Karla Bonoff

OTHER SONGS YOU MAY KNOW: Not by her. Several artists covered her stuff.

LINEUP: Karla Bonoff and some of the best session players in LA

WHAT’S IT ALL ABOUT: Singer songwriter really had the songs, but somehow didn’t quite make it big – unlike her compatriot Linda Ronstadt.

SOME WORDS, PHRASES AND CLAUSES ABOUT THIS RECORD: More known as a songwriter, unless you have “Personally” stuck in your head, Karla Bonoff’s recording career was beset by bad luck or bad timing or something. From the start of her career (with a band featuring Andrew Gold, Kenny Edwards, and Wendy Waldman) to the end, it just didn’t happen for her as it should.

It’s definitely an LA singer/songwriter album, with Bonoff leading a group of the best session players at the time through their paces. A lot of the songs have a tinge of melancholy and heartache – some resignation and loss also sneak in there. But her sense of melody and her voice is strong and the arrangements are spot on.

“Personally” is the one you probably knpw, but most of this is quite decent. If you’re into the LA scene of the late 70’s, you could do worse. And you probably did.

NOTES & MINUTIAE: In one of the biggest ironies in music, “Personally” wasn’t written by her. A performer more known for songwriting had her only success with a song she didn’t write. Hmmm.

GRADE B: There are a few things I exiled, and the whole thing isn’t streaming as a unit (but you can put it together if you wish).