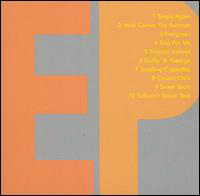 OTHER SONGS YOU MAY KNOW: Nah

LINEUP: Matthew Friedberger, Eleanor Friedberger with others on drums

WHAT’S IT ALL ABOUT: A stop gap release with singles and b-sides

SOME WORDS, PHRASES AND CLAUSES ABOUT THIS RECORD: The UK wanted something to play on the radio, so the Fiery Furnaces recorded “Single Again”, a modern take on folk songs (which was chilling and gave me a lot of pause), then released this full of B-sides and new tracks. It’s called EP, but it’s really 41 minutes, so that’s a misnomer.

Always challenging and inventive, the songs aren’t just tossed off B-sides and extras, but well-crafted and musically challenging songs, with the siblings working together and Matthew even singing a few cuts as well.

The songs mostly link together, which is good, but a little frustrating for mix-tape or playlist makers. But as a stop-gap, this works well, and allowed the Furnaces to create challenging works later.

NOTES & MINUTIAE: I’m counting this as a 2005 release since the singles were new enough and the album cohered enough to be a contemporary release.

GRADE A-: “Single Again” gives me chills. The rest are good examples of the tuneful oddness of the Furnaces.