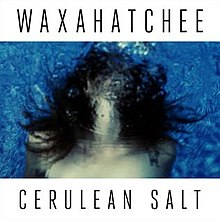 OTHER SONGS YOU MAY KNOW: Maybe a few tracks on NPR

WHAT’S IT ALL ABOUT: Katie Crutchfield goes from a lo-fi solo artist using the name Waxahatchee to a (for the most part) full band recording, keeping her songwriting chops intact.

SOME WORDS, PHRASES AND CLAUSES ABOUT THIS RECORD: Katie Crutchfield’s lo-fi debut got som accolades around the biz, but this, the first full band non-lo-fi recording brings out the Crutchfield’s songs in a way the hazy lo-fi sounds couldn’t.

Here, the hooks in the album come out, and the lyrical focus is sharper since the words aren’t buried in clatter. The songs are still mining the same vein (it’s not a pretty world and these aren’t pretty songs) – and some still are solo works with her guitar.

While the band recordings may take away some of the intensity, this is a good album that’s more accessible without pandering, and allows Crutchfield to get her work out to a more general audience beside the lo-fi fans.

NOTES & MINUTIAE: Most of the backing band was from Swearin’, her sister’s band.

GRADE A-: A great spinner of personal tales.