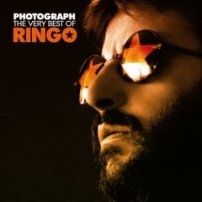 TITLE:  Photograph: The Very Best of

OTHER SONGS YOU MAY KNOW:  I’m the Greatest, (It’s All Down to) Goodnight Vienna

WHAT’S IT ALL ABOUT: Comprehensive comp of Ringo hits all of his high spots of his 70’s solo work (putting his other 70’s and 80’s work in the dustbin for the most part) and a few tracks from his career comeback.

SOME WORDS, PHRASES AND CLAUSES ABOUT THIS RECORD: Ringo, of all people, wrote and recorded three of the best post-breakup Beatles songs (“It Don’t Come Easy”, “Back Off Boogaloo”, and “Photograph” – the first and third co-written with George), and the most sentimental track of the breakup (“Early 1970”). He recorded a couple of fun, if top-heavy records, a country album (which I reviewed), and an album for his mum. Then, he careened off of a cliff – both personally and musically.

From 1975 to today, only “Wrack My Brain” hit the Top 40, and that may have been the best track from 1974-1991. Now, he’s recording some OK records and touring a lot with his All-Starr Band (basically whoever wants to have fun on stage with him for a while) and reveling in being Ringo. That’s perfectly OK – he’s got nothing to prove to anyone.

This is the best distillation of Starr’s recorded output for casual fans. Ringo devotees can check out his albums in full – but not many of the records on Polydor and Boardwalk are streaming, and one wasn’t even domestically released. There are good reasons for that.

NOTES & MINUTIAE: The streaming and download version skipped the tracks from Ringo’s Rotogravure and one later track, replacing it with three tracks from his best two records. That’s just fine and dandy.