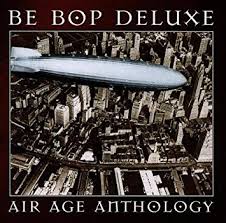 SINGLES: Their only charting single was Ships in the Night (#23 UK).

OTHER SONGS YOU MAY KNOW:  Not here, maybe if you were in the UK in the 70’s

LINEUP:  Bill Nelson. Charlie Tumahai, Simon Fox, and Andrew Clarke were on almost all of their albums. Robert Bryan, Nicholas Chatterton-Drew, and Ian Parkin were on the first album.

WHAT’S IT ALL ABOUT: Glam-to-progressive rock band led by Bill Nelson, a guitar legend for many UK new-wavers.

SOME WORDS, PHRASES AND CLAUSES ABOUT THIS RECORD: Be Bop Deluxe isn’t well known here, and mostly forgotten in the UK. Initially more glam rock than anything (their first album could be called Be Bop Deluxe Are the Spiders from Mars), Nelson broke up the entire band when it was noted they were really aping Bowie more than anything. He was then determined to create a more progressive and experimental band.

He never quite moved out of being labeled a Bowie sound-alike, as his sound was very much in line with the glam-era Bowie, but the next band he put together really tried to balance progressive rock with pop sensibilities. It’s tough, and only on a few cuts do they truly succeed in writing a song balanced between the pop chart and art rock.

But this is a band with serious chops (Nelson is an ace guitar player) and the ability to carry out Nelson’s musical ideas. He was (and still is) a chameleon in terms of style and influence, and always tried to stay ahead of the game. This is definitely worth a listen or three for progressive rock fans who also liked glam.

NOTES & MINUTIAE: They gained a following in the UK, with four UK Top 25 albums (including a live album at #10).

IS THERE A DELUXE VERSION: No. There are smaller comps but this band needs a more grandiose overview.

GRADE: B:  For fans of progressive and glam guitarists. Docked a plus due to nutty sequencing.