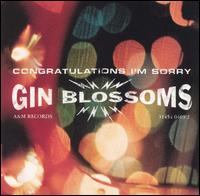 OTHER SONGS YOU MAY KNOW: Not on the normal version. See below.

WHAT’S IT ALL ABOUT: Followup to their surprise breakout sees them mining the same territory, but without their best songwriter the tracks didn’t have the same impact.

SOME WORDS, PHRASES AND CLAUSES ABOUT THIS RECORD: The Gin Blossoms second major label album did change up their sound on a few tracks, but mostly mined the same slight power-jangle pop sound. The issue was the songwriting – without the late Doug Hopkins the rest of the band had to pick up the songwriting slack, and except for a couple of tracks (“Day Job”) they seemed like lesser takes on their first album.

“Follow You Down” was really the only track that stands out amongst the rest of the tracks and it was the song that sounded like it really could have been on the first album. Really, much of the album sounded like that. They were really gunning for a second big smash, but by 1996, people seemed to be over the simple sounds of the band.

A major reason for the disappointment could have been a decision by their record company. A&M decided that their single for the 1995 Empire Records movie, “’Til I Hear It From You” (#11 US, #4 Mainstream, #5 Modern, #39 UK) should be left off of the new album even though the soundtrack was also released by A&M. That cut some sales and interest in the album, and forced the band to fill the void.

NOTES & MINUTIAE: The title comes from the phone calls the band got for their success, and the loss of Doug Hopkins.

IS THERE A DELUXE VERSION: Yes, they finally tacked on the 1995 single. It really could have made the album just a bit better.

GRADE C+: It really was the same kind of album as before, but with fewer memorable tracks.