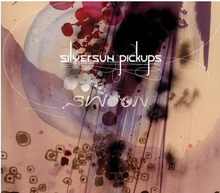 WHAT’S IT ALL ABOUT: A more atmospheric album than their debut, adding layers of textures and sonic ephemera to build the songs.

SOME WORDS, PHRASES AND CLAUSES ABOUT THIS RECORD: Not contend to reproduce their debut, the Silverun Pickups went into the studio with a collection of more mature songs that they then built into layered, moody tracks that enhanced their basic sound.

Brian Aubert’s voice is perfectly suited for this – his whispery, gentle tenor lies above the texture yet not overpowering it. His guitar work is still solid – using the Billy Corgan setting many times on his axe. The rest of the band settles in and knows their place, though the studio musicians, strings, and other production sometimes limits their effectiveness.

The record does have tracks that seem to run out of steam, and with all tracks between 4:40 and 5:54 in length there’s a tendency for them to run together. But this record shows the band moving forward, enhancing their sound without falling into formula.

NOTES & MINUTIAE: They had a song on The Vampire Diaries soundtrack and released a three-son outtakes EP in 2010.

GRADE A-. This build on their success and enhanced their sound with little problem