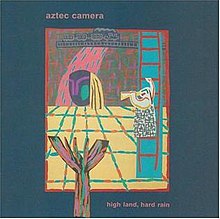 OTHER SONGS YOU MAY KNOW: I doubt

WHAT’S IT ALL ABOUT: Melodic jangly pop rock written by a young Scottish wunderkind.

SOME WORDS, PHRASES AND CLAUSES ABOUT THIS RECORD: Roddy Frame was 16 when he formed Aztec Camera, and by his 19th birthday he was recording their debut album for Rough Trade. But this wasn’t some teenage love story – Frame was much like Michael Brown of the Left Banke and Emmit Rhodes of the Merry-Go-Round. He was writing sophisticated pop songs at a young age with complex themes and melodies.

The first track, “Oblivious”, is an all-timer. Written with a keen sense of melody, with a great hook, the arrangement is sophisticated and the lyrics are deft wordplay. It’s hard to believe that it’s not the work of someone with years of experience behind him.

The rest of the album isn’t as bright and pop-friendly as that track, but Frame and the band still have a maturity beyond their years, and the album sounds fresh especially when comparing to the more production and electronics heavy records of that time.

IS THERE A DELUXE VERSION: Yes, three additional B-sides.

GRADE A-: One all-timer and the rest decent-to-good pop songs. It’s well worth some spins.