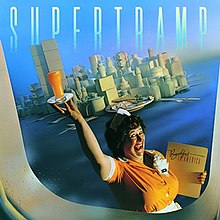 OTHER SONGS YOU MAY KNOW: Gone Hollywood

WHAT’S IT ALL ABOUT: After two sub-par albums following their breakthrough (to be covered in the compilation I will cover), Supertramp hit it out of the proverbial park.

SOME WORDS, PHRASES AND CLAUSES ABOUT THIS RECORD: Since their breakout in 1974, Supertramp had released two albums that didn’t light the world on fire, critically or commercially. While it wasn’t desperation as it was for Crime of the Century, it was possible that they were going to fade away if they didn’t release another successful record.

Well, consider this a success.

With four singles that are still played on rock stations, and well known by most everyone over 40 (maybe 30?), and deep cuts that are memorable without being ponderous or pretentious (for the most part), Breakfast in America is the album they needed, and probably their all-time legacy in music history.

Three of the four hits were anchored by Roger Hodgson’s falsetto voice, but the instrument that comes to fore is the electric piano of Rick Davies. The two also collaborate on vocals more (even though every song is credited to one or the other solely), making it seem like a true band effort. The rest of the group also add color and chops to the proceeding.

They didn’t throw away their prog tendencies (which does make some cuts linger a bit too long), and after their last two albums this was a welcome comeback to form where hooks and chops co-mingled.

NOTES & MINUTIAE: Originally, the record was conceived as a discussion between Hodgson and Davies, but that was scrapped very early on.

IS THERE A DELUXE VERSION: Yes, with a live set.

GRADE A: It’s really an enduring album with just a few tracks that seem to linger a bit long, but it wouldn’t be proggy if it didn’t have those, would it?