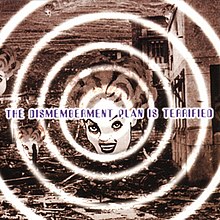 TITLE: The Dismemberment Plan Is Terrified

SINGLES: The Ice of Boston

WHAT’S IT ALL ABOUT: Second album from post-punk post-hardcore band adds different color and motifs to their angular, guitar driven sound.

SOME WORDS, PHRASES AND CLAUSES ABOUT THIS RECORD: You still have Travis Morrison speak-singing (and doing actual spoken word during “The Ice of Boston). You still have angular guitars like the Gang of Four and Pylon. But this time, the Dismemberment Plan adds some funk, swing, some layered production, and actual singing (and maybe harmonies even) to their mix. The result is a fascinating album that created a big underground buzz.

“The Ice of Boston”, later released by major label Interscope, turned heads in the alternative scene with its wry and bitter observations about a DC transplant living in Boston during New Year’s Eve. Many of their audience could relate – those that moved away from home or college to chase something, and not ending up with it.

Tracks like “One Too Many Blows to the Head”, with is swinging beat, trumpets, and catchy chorus, breaks the group out of their usual motif. Not that the usual wasn’t fine, but the band really has its moments as players here, and thus this is a leap forward. The tracks are also varied, and sequenced so the listener doesn’t get stuck in a rut. All in all, an improvement.

NOTES & MINUTIAE: Joe Easley stepped into the drum chair, and the band’s lineup would be solid for the rest of their career.

IS THERE A DELUXE VERSION: Japanese tracks, of course.

GRADE A: A true post-punk post-hardcore album (one that emulates the 80’s post-punk and is evolved from DC hardcore), and one of the best DC records of the late 90’s.